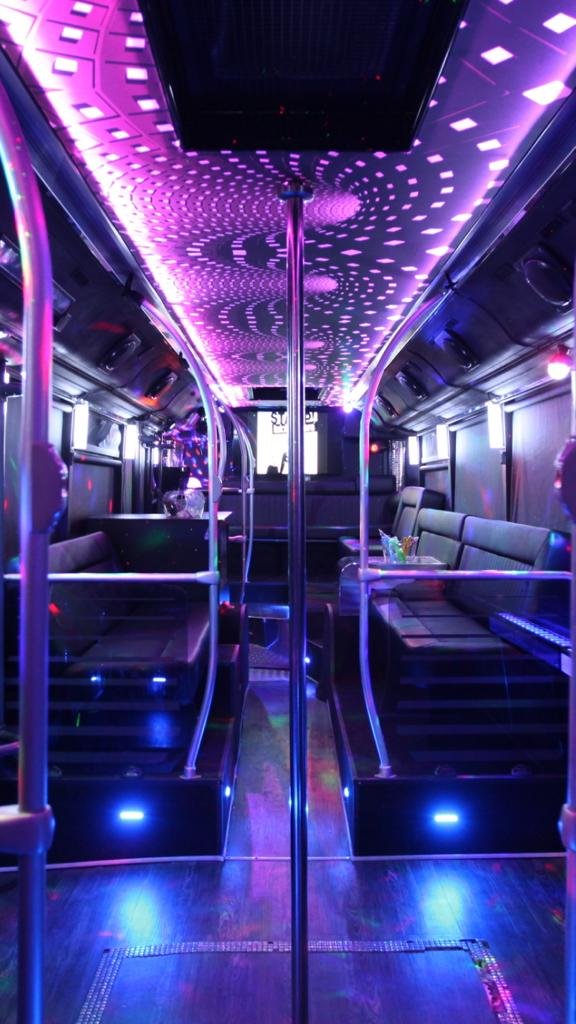 Party Bus Madrid. Planning a Sophie Hen Do in Madrid and among all the activities we wanted to do, there was always the problem of transport. In the end, let’s find the solution! Let’s hire a Discobus in Madrid to move between our activities without missing a second of the party!

As soon as the Partybus arrived, we took some photos outside the bus. It was full of bright colours, lights and a very loud sound. The truth is that our spirits went up as soon as we saw it. Just at the entrance, we had the bar service. We chose the Open Bar option. So as soon as we entered, we started drinking!

To begin with, on the way to the disco, the party had already started… Lights, music and open bar together with my friends! What more could you want for Sophie’s hen party…. Yes, her stripper!

The Discobus stopped and a muscular and handsome policeman got in. The music stopped and Sophie didn’t know what was happening and suddenly…. The music exploded!

The policeman, whose name was Julio, in front the bride he started to dance! The madness was as you can imagine.

The definition of the stripper is that he was handsome and charismatic. All this happened on the way to the disco, when nobody expected it. It was a real surprise.

On the other hand, it was a constant of continuous emotions during transport. The party continued for the whole hour of the service until he dropped us off at the door of the discotheque.

Once at the door, we took the last souvenir photos of the party Bus Madrid. But it didn’t end there, the coordinator accompanied us to the door and we went in without waiting. We had preference over the other people who were waiting. In the price was included the access without waiting in several of the discos in Madrid. I must thank all the Party Bus team for making us spend wonderful moments in group.

I leave you the contact details of the guys who helped me with all the organisation in case you want to come along!